I just purchased the Bob Siebenberg BFD kit from Sonic Reality/Esoundz and was auditioning the drums in BFD3 (3.4.4.31) standalone and the BS Timbale 1 Brush kit piece has now crashed BFD3 five out of five tries. I checked the Crash Log location but a crash log is not being created when this happens. All of the other kit pieces from this expansion function normally. I submitted a support ticket but since it’s Saturday I thought I give a try here as well.

Anyone have any ideas on how to correct this?
Thanks

This is the kit I was leaning on getting. The kick drum in the demo sounded really good, though I’m guessing it was partially the mix. Other than your issue, how are you liking that kit? It has quite a few snares. Are they nice?

The kicks (there are two) are pretty solid - it’s the same model (Ludwig Champagne Sparkle 26"), and both with a plastic beater, but kick one is a louder hit with lots of thump. Kick 2 is a softer hit with a bit of click. Not a lot of variety, but two good sounds and Kick 1 is quite good and would be a good choice for a rocker that you really want a good kick sound driving the rhythm. Kick 2 is good and has character and can cut through with a lot of velocity, but would be more useful in a softer setting.
The snares are fantastic. There are 7, with snare 2 also having a Snare Off version. There are from 4 to 7 articulations. There’s a Ludwig Champagne Sparkle, Ludwig Modern Deep (wood) & snare off version, Ludwig Round Badge, Ludwig Chrome, Ludwig Chrome Deep, and a Ross Garfield’s Ringy Homemade all with sticks, and no dimensions given. Some nice sounding snares for sure, with the Ludwig Champagne Sparkle probably being my favorite on first listen. The snares are all pretty tight sounding, without too much after ring, and are nicely recorded.
Nice assortment of toms, both sticks and brushes and the addition of the timbales is a nice plus. Great sounding cymbals (Zildjian and half just labeled BS kit). That’s about all I can say with the quick listen I’ve given the kit pieces so far.
They are only available as kit pieces though - you’ll have to build and save your own kits, i.e., don’t freak when you look under kits and there’s nothing there for Siebenberg.

i.e., don’t freak when you look under kits and there’s nothing there for Siebenberg.

You can use the Presets though.

I just purchased the Bob Siebenberg BFD kit from Sonic Reality/Esoundz and was auditioning the drums in BFD3 (3.4.4.31) standalone and the BS Timbale 1 Brush kit piece has now crashed BFD3 five out of five tries. I checked the Crash Log location but a crash log is not being created when this happens. All of the other kit pieces from this expansion function normally. I submitted a support ticket but since it’s Saturday I thought I give a try here as well.

Anyone have any ideas on how to correct this?
Thanks

Yeah it’s the same for me, except I use Studio One (Latest)

I don’t see any presets or kits for the Siebenberg expansion. All I have are kit pieces. Could you screen cap the list so I can see if I have them somewhere, please? I’ve checked Unknown and User already though.

So I thought I’d look into the files to see if anything looked suspicious and found an error in the Articulation Tweaks XML file in the folder for the Timbale 1 Brush - Hit samples: 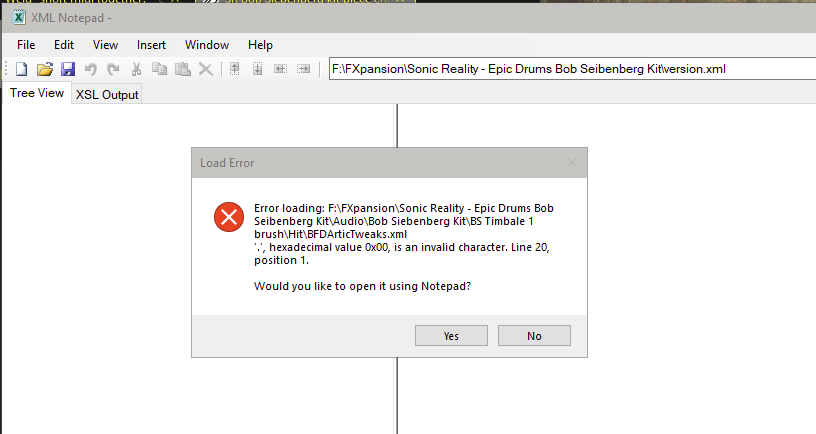 I can’t see anything obviously wrong in the file when opened in Notepad (my coding skills are pretty minimal though):

I would suggest raising a ticket here with Drew. The XML file looks fine to me as well.

Try temporarily deleting the artictweaks file, and then reloading the drum in BFD3. It will recreate it afresh, which should work. Then we can compare the old with the new, and see what the differences are. I don’t see anything wrong at first glance.

Thanks Drew. Hid the original XML in an ‘Old’ folder and reopened BFD3 and loaded the Timbale Brush 1 in the percussion slot. Then clicked to listen and BFD3 crashed (standalone). The new XML file doesn’t even have the articulations listed:

Also, I tried opening some of the other ArticTweak.XML files for kit pieces that were OK and got the same error in XML Notepad, so that error doesn’t seem to be the issue.

OK, just saw that it was picking up on my Old XML folder after I posted that. I moved that folder to another drive and tried again: it crashed when I clicked to play after loading and didn’t create an XML file.

I then tried copying in the XML file from Timbale Brush 2 - Hit, opened it and edited the lines out for VelLayers 9, 10, and 11 which Timbales Brush 1 doesn’t have, then tried loading and playing again, and it still crashed.

Starting to look like it’s the actual FLAC files to me at this point, though I already tried re-installing.

What happens if you remove the Timbale all together? Can you still play the kit?

Yeah, I ran into some crashes with the presets on the Sixties Downbeat kit, and maybe another. I’ll play with it when I get a minute.

I’m having this same issue with the Timbales in the Siebenberg kit. So far, just clicking on any of the 4 of them in the browser to audition, or in kit view crashes BFD3 in Standalone. I was able to drag them from the browser to create new channels, but that’s about it. Haven’t done any further testing.

Also, the BS Snare1 Rim shot articulation is noticeably quieter than the main Hit articulation. Not sure if it’s by design or not. Honestly, the rimshots on a lot these snares seem lacking really and the one snare I like the most doesn’t even have a rimshot. It might be a thing with the velocities and choice of samples, but I find it hard to get a good standard rimshot “crack”. Some velocities seems to have too much stick hitting the rim and not enough of the skin. I’m thinking these might be cool for more jazzy type stuff, where the dynamics and tone might come more into play.

I’m still digging this kit so far and plan to make a post here with my overall thoughts on it. There’s some good and not so good.

Hi SF_Green/Fender_Bender : could you send me the BS Timbale 1 Brush kit piece, so i can try to load it and see why it crash ? Regards.

That gave me an idea, I just loaded up another kit (From the Andy Johns Classic Drums set) added a percussion slot and tried to load up Timbale 1 and 2 from the Bob Siebenberg expansion…

Next I am going to duplicate a Bob Siebenberg Kit, the add a Percussion slot, and start adding the Timbale’s and see what gives.

By the way, this was done inside of a DAW, didn’t try stand alone, might do that later, but I think it will work.

Standalone works the same as in the DAW, just that it crashes with Tim1 Brush.

I’ll send you a link where to download it.

I’ve found that it’s not a preset that’s crashing the Sixties Downbeat kit, but the Crash cymbal itself. I’ve deleted the artic tweaks file (which gets re-created when BFD3 runs), to no avail. That kit piece simply doesn’t work.