My main request has always been to simplify the installations paths. I have stuff all over the place. Currently I am removing all the fxpansion folders and archiving in the hope that it will simplify things a bit (hopefully I don’t break anything in the process).

So I have been trying to sort out my presets and I have found two locations:

I have presets spread across these two locations (also Grooves, Kits, etc.)

So which is the correct path and why are there two paths anyway? Please BFD Drums guys, just have one place for all future installations.

Also, is it OK to have subfolders in the Presets and Grooves folders? I like to group the presets by name. So, for example, my Groove Monkee files go in their own folder, which has further subfolders for each library (like Rock, Country, Blues, whatever). Seems to work and I hate having all presets sitting in one folder making it difficult to see what I have.

Audio/data should never be in the same folder though.

I have all my audio (expansion kits) in a master folder called FXpansion (soon to be renamed) and then each expansion kit with have it’s own named folder like BFD London Sessions and so on.

Yeah, I have all my expansions on their own drive, luckily labelled BFD, not fxpansion, so no renaming needed.

OK, I like the logic of your suggestion, although it still doesn’t make sense they created two paths with the same folders in. I prefer one place for presets and in the same location another folder called User Presets, so they’re all in the same file structure.

I am getting some oddities though, like when I select the presets for Jazz Noir I also see listed the .png files for a different library, not even the Jazz Noir .pngs. Not sure why I’m even seeing the .pngs at all.

BFD Drums really need to tidy all this up. 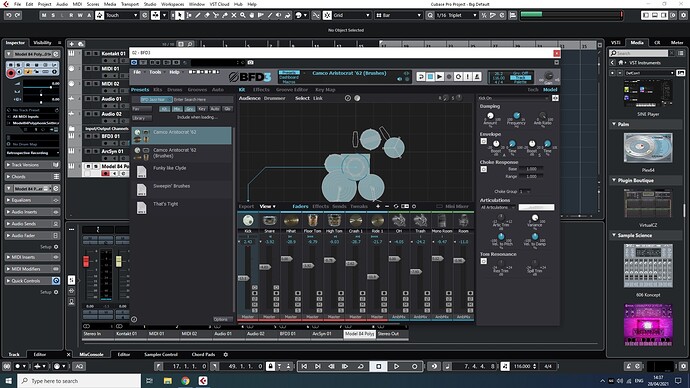 I move stuff around all the time. I don’t like keeping expansion pack presets and grooves in the main BFD3 directory, so I typically move them back under the expansion pack directory. I typically keep the /System path convention, just because at least in the olden days, IIRC BFD1 cared about that. Not sure if it’s necessary today, but it doesn’t hurt.

Heya,
The reason there are two locations:

ProgramData one == factory presets, kits, keymaps, etc.
User one == your … erm… user ones.

Eventually I want the factory ones to sit next to the audio+grooves folders for the expansion packs. But I didn’t do that for this release because I didn’t want to end up giving everyone a load of problems with duplicates. Could do with writing a tool that just automates everything for you all… consolidates all of the content into the right places and gets everyone on the same page. Maybe in the future.

And a tool that lets you edit preset and kit names just like the (ahem) BFD3 Metadata Editor.

Well for factory stuff, the goal really would be that you wouldn’t need to do that. But for user stuff… it would certainly be awesome if a user could do a bunch of clever things like that, for sure. Finding presets and kits is a pain. Wanna make that much better.

But for user stuff… it would certainly be awesome if a user could do a bunch of clever things like that, for sure

The guy who wrote it was called Anatoly Burakov and was on the old fxpansion forum but not heard of for a long time.

Hey, I’m migrating now, I’ve been with BFD since 1.5. I’ve got BFD stuff all over the place, BFD 3 duplicates. BFD2 is still in there. I don’t know what to do with any of it. Some kind of automatic clean up, or screen shots of a proper install would be great.

I’m not extremely savvy, and I worry that there could be problems from duplicates and things in the wrong places.

Overall, Things have been good. Until the migration.

When you say you’ve got stuff all over the place I’m guessing you your expansion kits as well as your libraries? Are they all on the same drive and is that drive just for samples? I.e NOT your C-drive?

You will have to ask for new licences for BFD1 and BFD2 libraries. They are now respectively Eldorado and London Sessions.

If you’re running your old BFD1 and BFD2 libraries in BFD3 along with all the presets you, ‘shouldn’t’ get duplicates.

I would recommend having all your libraries on one drive or at least all the audio data from those libraries (preferably an SSD).

I have mine set up on an SSD with a master folder called BFD Drums, inside that folder are my other libraries in their own folders so I have BFD3 Core library, 8 Bit Kit, BFD Delux Kit, BFD Jazz Noir, and so on.

I’d say it won’t make a lot of difference whether you set them up like that now, or after you’ve migrated but you’ll have to rescan your folders if you do it afterwards.

Also there is an updated version released this week which should address some of the earlier migration issues. Here are the release notes

You can download it by using the BFD License Manager and checking the downloads under the BFD3 product.

Hopefully your experience will benefit from the bug fixes.