Something always bothered me and now that we have a forum I’m taking the opportunity to ask all of you.

Is it normal that when I load an other snare than my main one (to do layering), I can’t access to its mics ? Like, I’d like to mute the bottom mic or the rim one, but no. Sometimes I have 0 microphone that shows up, sometimes only the bottom one, for example, or the top… It seems random, I didn’t find any way to do it manually.
Of course, I’m not talking about the ambience microphones but all that concern the direct source.

Here, you can see that I deployed all the “hidden” microphones but for the second snare, the Tama Tempesta, I don’t have any microphone channels. 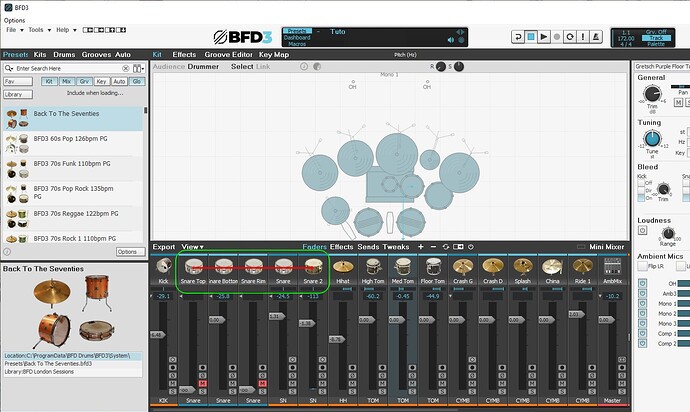 Here, one channel is displayed but I don’t know why this one and only this one… 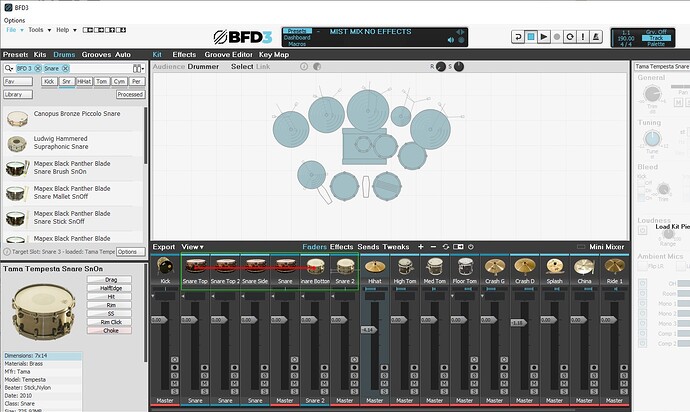 Can someone help me on this issue, please ? Thanks a lot !

There was a bug reported a while back about missing mic channels but I think it was only on certain snare from certain expansion kits. I’m guessing you’re using the latest build v 3.4.2.4?
I didn’t see anything about a fix for that bug in the release notes but I think @BFD_Drew knows about it.

I have the last version (not the new update yet), but I think I have this issue since forever now… That’s not a huge problem but in a sense yes

Not forgetting of course that some snare do only have 3 channels, top, bottom and direct.

I’ve done some more looking into this tonight and it I think the problem seems to be the mixer not updating when you change snares.

I started by loading just a snare from the Big Orchestral & Marching Band, the snares in that expansion only have top, bottom and direct mic channels I went through loading a number of snares with just 3 mic channels until I got to one of the Japanese Taiko Percussion snares, they have one bottom mic, and 3 top mic channels along with the direct mic channel.

So far all is as it should be but when I reloaded one of the B.O.M.B snares I find I now have 4 mic channels, 3 top mic, one direct mic and no bottom mic, previously I had one bottom, one top and one direct mic.

So definitely a bug in there somewhere.

I get the same behavior with kicks and snares, every expansion. Before the recent updates I’d get the last of the channels, so snare bottom or kick sub etc, now I get none at all, click the arrow to expand the mics and nothing pops up. Again for both kick2-5 and snare2-5.

Would you mind writing a bug report so we can investigate this? I have just created a Bug Report section for this, so just use the guidelines and include as much detail as possible.

Do you want the report posted in this thread or elsewhere?

In the new Bug Report subform would be grand!

Heya, we’ve got a repro case for this now too. Thanks all.

Sorry I was away… Seems like this issue has been taken seriously. Thank you Steve for checking it and to the devs for taking it into consideration !

I’ve had this problem too. It’s also when you add a second kick drum as well. I have kits with 2 snares and saved them with different [Snare Top] Mono-Channel 3, [Snare Bottom] Mono channel 4) outputs. When I change the Snare 2 channel back to master, it doesn’t sound correct. I need access to those other mic channels.