The login process has been updated to fix issues with inMusic account access and offline software usability.

Here are the installation steps: 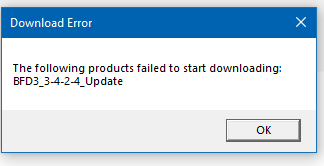 Incompetence at its finest

@lordadb @shanabit
It should be working now. I triple checked everything, and tested here on both platforms and it’s looking good here.

Might have been some server time-out issue or outage in general. Would need to investigate.

When you were prompted to login did you fail to login/were unable to log in to your BFD3 account?

No, it logs correctly. Though now it’s downloading.

I had the same issue when I first tried. Make sure that you follow steps 5 & 6 which is where I went wrong first time. Good luck.

Ok, no issue now here. All it’s working as expected.

Hi Drew,
the installation worked smoothly on my PC and on my laptop (boith windows 10). Standalone and VST are working offline in Cubase 11 and Reaper 6.29.

Bingo, congratulations and a warm Thanx to You and the development team for making my favourite drum sampler work again under the In Music ownership.

The install went as well as can be expected.

I’m still showing a problem with the Imperial Drums Expansion

All cymbals are there but not individually selectable from the mixer

When I select the kit piece (cymbals) in the mixer nothing shows in the browser.

I can load the cymbal kit piece from the initial browser patch to the channel.

It’s not an overall problem as the kit pieces are there. But I’m not sure yet if it’s a bug or if it’s just the way the expansion pack was done…

Not tried it all offline yet due to other computer related issues. So for my the jury’s still out on that.

I’m not sure if I’m Missing the concept of the Imperial Drum Expansion.
As I can see with the presets the different kit pieces appear in the mixer, but I don’t seem to be able to swap kit pieces very easily.

But it seems I’ve missed something along the way.

There doesn’t seem to be much info out there on this expansion pack and concept of it.

Hey @Murt , can you send me some screenshots or maybe a short screen-capture of what you’re seeing?? If you don’t have anything to do screencaps with, you could try using LICEcap: Cockos Incorporated | LICEcap

I’m not sure I’m 100% following what the issue is, but could it be something as simple as there being tag errors in that packs xml, causing the browser to not show anything when the kitpiece ‘cymbal’ filter is activated? I’ll check that out tomorrow, but if so, that’s an easy fix for us.

I’ll try to have a look tomorrow (all being well)

I’m not sure if it is an actual problem or a pack design.
(quick) = Browser shows all cymbals (or toms) none individually selectable. Only cymbal 1 can load all cymbals - cymbal and ride don’t load from mixer.

But - the presets load up as they should. There doesn’t seem to be any customisation of the presets.

I can’t make up my mind if it’s just the concept of the pack (whatever that is ?)

As I say, I’ll try and have a look tomorrow, but being on the thick side of these things - I’ll do my best.

So you see in the browser at the top in the search bar, I’ve got the filter for the actual pack activated. This tells the browser to only show me drums for Imperial.

When I select the Crash 1 slot, I see that the browser has automatically - and usually helpfully - added a Crash filter to the search box too. This is to ensure that it only shows “crashes”.

But with Imperial I see no drums. Probably because the crashes in Imperial do not have the correct kitpiece tags for the cymbal subclass. When I select the Cymbal slot, it works as expected.

Quick solution - delete the crash filter from the search box.
Slightly less quick solution - I need to go through all cymbals in the pack, update the xml, and then update the online installer for the pack, and then help you and others update their local copies without having to download all of the data again.

Send me a PM, let’s explore this together. Should be fairly straight forward to fix.

I’ll do my best tomorrow.

But yes - what you are showing seems to be the case.

Sad tale to tell. I followed the instructions to a ‘T’ for downloading the new license manager and installing the update. That all went fine. Then the problems started. First I still can’t work offline. I tried opening the updated BFD 3 with being logged out of the License Manager. BFD put up an error message saying I had to login which means going online. That was bad enough.

Then I found out that my customized presets/kits and GM MIDI map (the original is not true GM MIDI) were all gone. Thankfully I had a clone to go back to. OSX 10.13.6 on a 2012 MacPro cheesegrater.

You have to be logged into License Manager. This requires going online to do so, but then you can go offline. This is expected behaviour.

If you were not already on 3.4.x.x, then your customized presets and kits will have been located in the relevant factory and user FXpansion folders. None of this stuff is deleted or messed with during install.

Copying them out of there into the BFD Drums equivalent ones and then rescanning the data-paths would have cured that. No need to revert back to a clone or back to 3.3.x.x.

Thanks Drew but not good. I try and keep my daw computer offline as much as possible. I shouldn’t have to go online each time I want to use a program. I don’t like persistent logins on sites and this is what’s happening with BFD 3.4.2.4. What happens when I reboot the computer? Do I have to login to the License Manager again? Sorry but until this gets fixed I’m reverting back to 3.3.1

Do I read this correctly? we have to be online to open the software but can then go offline?
How is this ‘fixing the offline issue’?
And more importantly - if this is expected behaviour, why are you advertising the software as needing an internet connection for downloads only?
This just gets worse

I disabled Ethernet, rebooted PC (Win 10) and BFD3 standalone loaded up fine and seems to operate as expected with no Internet access. So I don’t see the problem? The only question I would ask is under what circumstances would I need to have access to Internet for? Periodically? Only on update or installing an expansion?