Tips and approaches for a realistic drum performance

Hey BFD people. By curiosity and in order to make a topic that is not complaining about glitches, I thought about sharing what I do for making a midi drum performance sound like it was actually played and recorded live.

Of course, we all (should) know about quantification and how, unless it’s wanted, every notes must not be perfectly aligned to the grid. We also know about velocity and its importance in making dynamics. But there is more to that. Here is a few tips that I’m thinking right now, I may add some later.

About DYNAMICS and PLACEMENT :

Here’s how your notes and velocity ranges should look like : 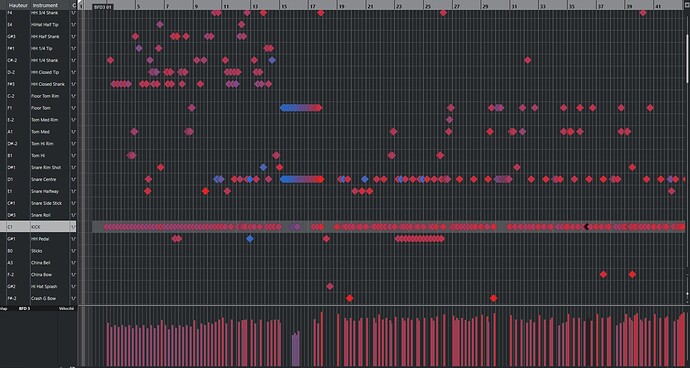 midi1741×930 365 KB
Of course I’m talking here about the diversity and dynamics. Not the intensity of the velocity that is up to your song, the drum samples used and your type of music !!

Now, what you can also do through BFD3 to help you create diversity and realism.

You can use it on all articulations or select the one you want to affect. You can then choose to add a higher or lower pitch based on the velocity you are using. By adding just a little amount you can create a sound change when hitting hard, added to the impact of the high velocity. I found it really useful on some hi-hat articulations. Don’t hesitate to also add some db for some articulations that may sound weak compared to the rest, like the “Open Tip” that is often weaker to the others, on many BFD3 hi-hats.
Here is a sound test from a 0% to 5% then 9% pitch change (higher) for the open shank articulation :
Stream PitchVelocity by Autumn | Listen online for free on SoundCloud.
Don’t overuse it unless for creative purposes !

Finally, one last thing, check if your DAW can show a drum map. Drum maps are like what is shown in the BFD3’s groove editor, it names the drum element linked to the midi note, instead of a simple piano roll.
I know that Cubase has it through the “rythm editor” that can load drum maps. You can see how I renamed everything in accordance with the articulations, on my screen above. I say that because I know a lot of people that are placing midi notes just by ear, and when they send me the midi file I notice that they put all snare hits on the edge, and use wrong articulations. It also forces you to use all articulations because you can see clearly what you have and where they are.

I’m sure that there is still many ways to improve, but here is some examples of rock drum tracks that I created on BFD3 based on some of these tips.
Here is the first and most recent one including all the tips mentionned except for the saturation. There is no effect but a limiter on the master channel. Stream Drum track 2 by Autumn | Listen online for free on SoundCloud
An older drum only track with FX off : Stream Tutonofx by Autumn | Listen online for free on SoundCloud Yes I know, the volumes are not balanced, I did not have the time to adjust the channels

Here is the same last track with a bit of amateur mixing and the other instruments : Stream Tuto Full No Voice by Autumn | Listen online for free on SoundCloud

Of course, the average listener won’t notice all of the details you spent your time on. They won’t notice that the drummer hit the bow and not the edge of the crash at 2:32 during the chorus, while listening to your track through a compressed youtube video and during a party with everyone talking on the back. But they will FEEL the humanity of your track, even unconsciously. Drum and bass quality is more important than guitars, but a lot of producers take more time working guitar sounds than the drum or the bass.
If you want to stand out and can’t afford to record real drums, take the time and work your midi tracks, mostly when you have the chance of having a great software like BFD3.
Now, I’m just an amateur but I spent a lot of time understanding midi drums and reading guides, and some of these tips are never mentioned so I thought I’d give it a go, while skipping the most basic tips that I may add later, with other ones. I’m also open to new tips and approaches, I’m eager to hear your take on all of that !

This is great. Super helpful. Thanks for taking the time!

Nice one! I programmed drums for many years without knowing any of this. I recently picked up on some of this stuff, from this forum, and it is really making my drums more dynamic and musical. Thanks for posting this.

Yeah, I noticed on a latest mix of mine, that some velocities were poking out too much, even when the actual velocity values weren’t too high and adding my processing chains in my DAW. I’ll have to play with that AMG setting.

That velocity to pitch knob is another one I will have to experiment with.

I’m glad to see that this post can be of any help. When I’ll have more time I will add some more basic or “advanced” tips by editing the initial post, while replying to notify the update. Meanwhile, if you also have advices don’t hesitate to share them

Great idea having a creative section.

I use all the ideas you mentioned here already but good to share.

Nice, great comments on getting MIDI drums to sound like “real” drums for the styles that need it. It’s why I continue to prefer BFD over the alternatives and wish them the best in sorting out the current challenges. To supplement your comments;

Music is about feeling and a real drummer won’t be playing … the same range during the whole song.

> Tempo maps can be helpful, i.e. fills at the end of song sections

like the “Open Tip” that is often weaker to the others, on many BFD3 hi-hats.

I make good use of the Trim/Variance articulation settings to balance a particular “drum” and save it as a preset,

check if your DAW can show a drum map

I have a baseline BFD keymap for the DAWs I use on a regular basis. At least one (CxB) features the ability to import names from a loaded keymap, but gets a bit verbose as mentioned elsewhere in this forum. I found creating a custom keymap to be worth the effort.

And (imho) often the instant “tell” of band-in-a-box/bedroom, etc. productions. I’ve seen favorable comments on the MIDI grooves for BFD, and while the ones generated by real drummers should be usable, have yet to try one. Thinking maybe I should take up the challenge of writing a tune from the groove up?

I would like to add a little more here, as this is a very important subject.

A couple of years ago I studied some real live played drum midi tracks. I was surprised by how much, even a great drummer is not on beat (don’t want to say out of time). Drummers “feel” the song. This is pretty much impossible to replicate as your DAW cannot hear what you are trying to achieve.

However you can employ some tricks to help. Moving your snare or hats slightly ahead of the beat gives a sense of urgency, great for going into a chorus maybe? Or after the beat for the verses? Give it a try.

One other point from me. I never use quantinize ever. I play everything in manually. After all a live drummer would never hit the beat spot on

I like watching this guy to pick up tips and tricks. He’s way above my skill grade in terms of programming or even understanding drums, but thats obviously part of the point Hey, mods, any chance of making this thread a sticky?

Your wish is my command

FWIW, listen carefully to how different drummers perform. Listen to their habits. Charlie Watts’ snare is almost always late, on the order of a 1/64-1/128 note. Ringo has a very characteristic way of rushing his triplets. I mean, everybody rushes their triplets, but Ringo has his own way of doing it. Put the recordings into your favorite DAW, and find out where those notes are actually falling.

Another tip - some playback engines like Superior Drummer are designed to handle midi velocity 127 all of the time. This is because they use a round robin technique to switch out samples.

BFD3 is a little different to that. We use an anti-machine-gun algorithm which offers the user more control over how the switching of samples occurs. That’s what the loud and tone knobs do in the dashboard - they control the AMG algorithm.

The main one to use is the loud knob, which expands the available pool of samples for each hit.

But when you send 127 into BFD3, you end up with half the range because obviously there is nothing above 127 for the engine to access.

So if you want to maintain dynamic range on your hard hits, I’d advise going no higher than 125. Give the algorithm a little extra headroom.

Thats great info to have, thanks. So the AMG is one thing that gives BFD the edge in terms of sound? Excellent stuff.

Anyway, this just popped up on my feed… New controller/instrument, might be useful for finger drummers? I have PhonicBloom’s T-APE and its great, very tempted by this… Could be very helpful, tactile alternative to squidgy pads? I’ve watched the Drumeo and other reactions a few times already, but Larnell is such a badass that I couldn’t resist. I said the same thing, the first time I watched it. How the hell have you not heard this song? It was/is literally everywhere, including tv commercials. He must be in his own bubble.