Q1 is over - any update on M1 native compatibility?

Because those of us with M1 Macs can’t run Logic native and have BFD function correctly under the Rosetta plugin interface, we’re waiting for either a fix to that or an M1 native version.

All of my other plugins have been updated to native versions. Is there an update on BFD3?

We had to shift priorities from M1 support over to improving the software unlock system - making it more robust and more reliable - and the next build addresses that, and a bunch of bugs within BFD3 itself. This will be going into beta within a week or two.

After that, there will be an experimental M1 build that will be released to the beta team, and we are also planning out VST3 support, but I don’t have any estimations on when that might be seen at the moment.

Things on my plate:

Is there any chance the release addresses the bug that makes BFD3 unusable as a Rosetta plugin while Logic is running native? Can explain more if necessary. Also, official Monterey compatibility?

When you say “our other products”…?

I too am very interested in this being addressed as quickly as possible. Without Rosetta, BFD just doesn’t work, and with Rosetta, it causes my sessions to crash. All my other main plugs are fine w/M1. BFD is a pretty major part of my workflow here. Thank you.

that’s one really loooooooong development cycle. I can’t help but wonder is there was a brain drain that has crippled development.

FWIW it’s not a bug. The only way Logic can fully run a plugin compiled for Intel is for Logic itself to run in Rosetta. The BFD stand alone and license manager for the currently release are also complied for intel an automatically run in Rosetta when launched.

No. We just have an extremely large amount of work, and this particular AU issue has been difficult to diagnose.

Other products we are developing

So, if having BFD is a priority, and having M1 compatibility is also a priority, are these two things an immovable force and an unstoppable object? This one plugin is keeping me from running my sessions natively. You mentioned that “other products” are being developed. Can I assume that I shouldn’t wait anymore for Apple Silicon and BFD? I would be sad, as I have really enjoyed BFD all this time. I have been holding out for you!

I’m happy to find a way to just use the Logic Drum Kit plug for a while longer if I know my investment on so many great drum sounds will come to me later. LDK is no fun haha. But, if I’m told that this compatibility just isn’t going to happen, that would also do me a favor.

Sorry if I’m being “dramatic.” I’ve got my first real deadline since 2020 and I’m struggling with the drums.

@blatboy If you don’t have any other drum VI’s, you can grab the free version of Steven Slate Drums 5.5. You only get 1, or 2 kits, but otherwise it’s fully functional. Very easy to use. There’s no processing, but the samples are pretty much close to mix-ready. You can totally get them to sit in a mix with just printing a stereo track and some drum bus plugins.

Uh, nevermind… looking at the specs, I don’t think it’s M1 native yet either. Do some searching though. I know there’s a few other free ones out there and they may be M1 native. I saw a newer one recently, but can’t remember the brand. 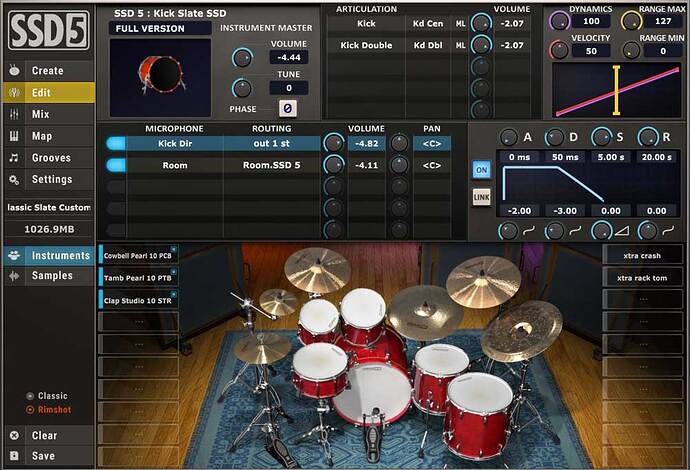 SSD5 has every drum sound imaginable. The kits model the famous drum sounds of classic artists like Led Zeppelin, Metallica, and more!

BFD 1, 2 and 3 will be relegated to legacy projects exclusively. Makes me sorta’ sad, but I’ve got work to do and need tools that support it.

Unfortunately, I’m leaning in that direction, too. I’ve been doing more playing than writing for the last few months, but that will change soon. Without any sort of timeline (days? weeks? months?) it’s too hard to continue waiting. It’s sad because as much as I like BFD (and I appreciate all that Drew does), there’s just not a lot of confidence that it’s going to work properly for the long term given the bumpy transition to inMusic and M1 support. Hoping that there’s some clarity soon to give me hope . . . .

I suspect that InMusic may need some business analysts to help them take another look at their development priorities.

With the amount of vendors who are now silicon-compatible, literally everybody around me who works and/or dabbles in music has moved to M1 - after a long period of hesitation due to these compatibility issues.

That includes a shed-load of former Windows users.

Initially, I was fine using Rosetta as many of my other products were not Silicon-compatible. Times have changed. And now, with the obvious performance boost, it’s a little frustrating switching to Rosetta just to use BFD.

I also have Superior and Slate, but the sounds are a little sterile and unorganic for my tastes. Their presets are great (and superior to BFD) for e-Drumming - but not so good for organic-sounding mixdowns.

SD Works fine on my M1. It’s a pity it does not have a standalone version though.

If you use a Focusrite soundcard, you can also get a free version of Addictive Drums from their shared wares page. You get 1 drum kit with it, but that is tweakable, of course.

And there are some nice freeware ones, such as MT Powerdrums, which sounds quite reasonable and is user friendly.

@pleudpniem My Focusrite interface & account gave me a free AD Keys expansion, but not AD Drums.

@Fender_Bender They might have changed their offer, some time ago. It really is AD that I got from them, these programs are difficult to confuse with each other, or possibly some of my drums sound very funny

Last time I checked it was AD.

I suspect that InMusic may need some business analysts to help them take another look at their development priorities.

With the amount of vendors who are now silicon-compatible, literally everybody around me who works and/or dabbles in music has moved to M1 - after a long period of hesitation due to these compatibility issues.

That includes a shed-load of former Windows users.

I’m still a Windows user and I also can’t hang around for inMusic to change course, because they never will. They spend more time developing a subscription-style licence manager that no-one wanted, but don’t invest the time in M1 and VST3.

I’ve heard albums that used Slate or SD3 and didn’t realise they werent real drums, so I wonder if we’re all a little biased in that department thinking BFD is some holy grail.