I’m not sure if it’s a bug or a feature of oblivion,but my Amb3 microphone doesn’t show up on either the
presest drums or the normal drum kits,
although the microphones are visible in the view.
Any ideas what this could be?

Attached is a picture with the setup 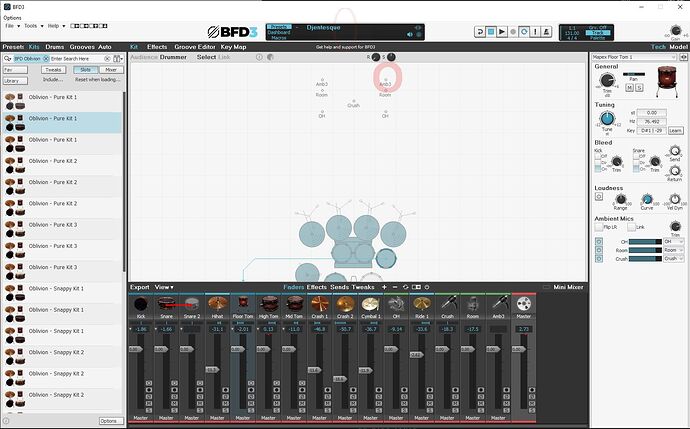 I’m looking at the BFDInfo.xml for Brady Snare 1 Wires On in Pure Kit 1, and it looks like Amb3 is not used for that kit. It looks like OH and Room are the stereo ambient mics, and Crush is the mono ambient mic.

You could take a look at the other kits and kit pieces, but I expect it would be the same.

After i check all Kits noone use the Amb3 Mic,u can switch the Ambient send destination to the Amb3 Mic,
but nothing changed with the sound after.
Didn’t understand the logic behind,Amb mics are so usefull to ´create sound
i’m not happy about this situation.

You mean in addition to the room mics? Yeah, it’s just the style. Some kit designers go nuts with the ambient and room mics. Others are very minimal. There was even a Drum Drops kit that had no direct mics at all, which was super weird.

If I’m not using a preset, then a lot of time I tend to go more minimal on the ambient mics. It’s usually just some OH’s and one of the Rooms.

One thing you can do is put a send from either your directs or one of the ambient channels to Aux1, and then put a reverb plugin on it. You can use one of the built-ins, or if you have a nice one in your DAW, do a totally separate output. If you want something closer to your typical Amb3 mic that doesn’t sound like a huge echo chamber or whatever, get the room size and reverb time down.

Not a bad idea, but not what I have in mind. @kafka

But why are these two Amb3 microphones included in the schematic if they are not functional?
That irritates me

My guess is it’s just an unused channel. Kind of like how some kits have a percussion slot that’s undefined by default. If you press the Remove Unused Channels button, the unused Amb3 goes away.

I was curious, because a few people have asked similar questions, and I just don’t remember giving it a whole lot of thought. All I can say is it’s not really all that consistent from one expansion to another. Some are missing the Amb3. Others have the Amb3 but are missing Room. Some have vastly more mics than any sane person would ever put on a kit in real life.

Seems so,but but non-existent microphones should not be included,
that leads to questions and irritations.
For example, I downloaded and installed the pack twice to rule out a mistake on my part,
not everyone is lucky enough to have enough bandwidth for the download, or enough time to deal with the problem!