No sound? From BFD3

I might be wrong, but did you activate the outputs in cubase? 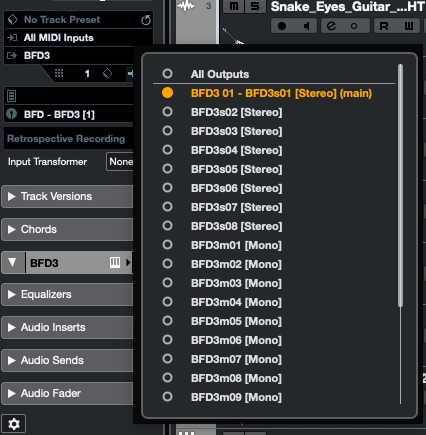 Thanx.
My output are the same as in your picture. But I can se that it says s01, in the other instrument output it says st.1
But I do, offcourse, have stereo main as output, I can hear all other instruments.
But I suspect that it is something trivial like this. I dont know all aspects of cubase.

Is the track record enabled? When you have BFD play the presets do you see the meters on the right edge of the instrument track move?

This is weird, but probably something trivial, as you say.

Do you get sound playing when you use the standalone app?

Do you have either Record Enable or Monitor selected in the Track Header/Inspector? Also, can you hear sound when you play a groove from within BFD3, even though you can’t hear it when you use MIDI input?

Yes, I have all these I think. I dont get sound from the standalone eithrr. Here is a screendump: 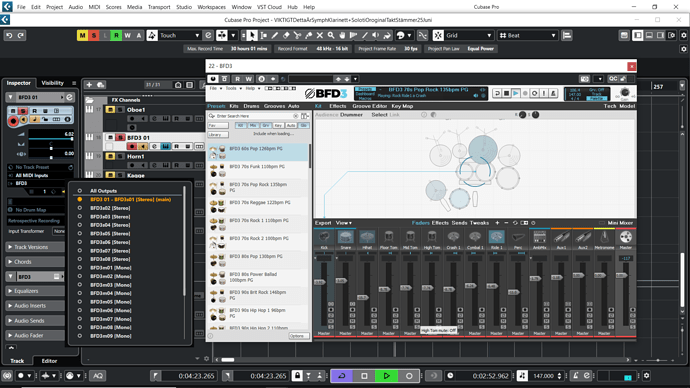 Based on your screen cap it doesn’t look like your kit loaded. I see in the Dashboard you have the 70’s Pop Rock loaded, or at least attempted, but in the drum view and the mixer your kit pieces are not there. Can you reload another kit until you get something loaded?
Sorry if this is obvious to you, but if you’re new I thought I’d point out that when a kit is loaded properly the drum view pieces should be blue and there should be clear pictures, not grayed out, in the mixer for each drum. 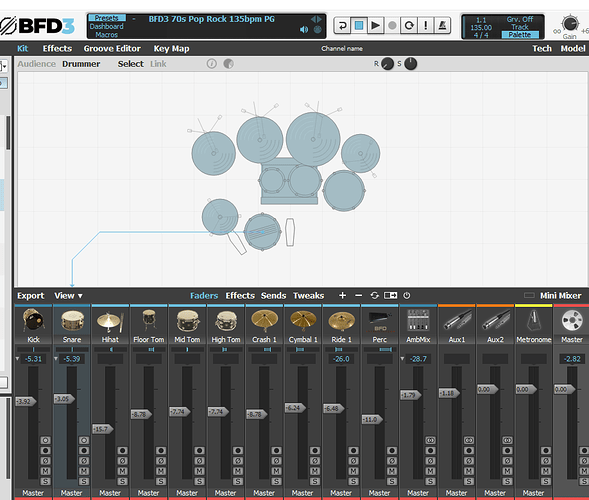 Thanx.
I was pretty SURE I was going to make me seem very stupid. I thought a kit loaded automaticaly with the preset.
Now its working. I will send you a bottle of 12year old whiskey (No, I will not, I am cheap).
THANX!

@rolnor Well yes, a Preset should load kit when you load the Preset. If they are not, then you do have an issue.

You’re definitely not stupid here. Like @Fender_Bender said, the kit should have loaded. It shows a Preset in the Dashboard and it should have loaded the kit for that Preset (a Preset contains a kit, grooves, and possibly some other parameters and FX).
So after closing BFD and rebooting your computer, if you load a Preset does a kit for that Preset load? What happens if you load just a Kit and not a Preset?
If a kit doesn’t load for either of these actions, I would start by re-installing BFD3. Did you install the latest version, 3.4.4.31?

Just to note, the Preset name in the Dashboard will still show, even if there’s no kit loaded. This happens when you have a Preset loaded and then clear the Kit. And BFD3 is pretty weird at times, so I wouldn’t be surprised if there’s another scenario where this happens.

Hadn’t really noticed that before. Good to know.

Thanx!
I seem to have some problem with the installation.
Is it wrong to place the plugin on another drive than C:?
I use F:, maybe thats the problem?
I have had som sound but then all the presets dissapeard suddenly(!).
Its a nice piece of software, I am trying to re-install.

Yes, the plugins and standalone have to be on the system drive. Sample content can be wherever you want.

OK, then its getting there.
One unrelated question, I bought Beierdynamic DT770 250 ohm and they sound poor, it sounds much better in my speakers, I also need to crank up the volume to max and still gets poor sound. I guess I should have bought 80ohm?
I have a tascam 144 interface.’can I fix this? Or do I need to get the 80ohms?

@rolnor I use Beyer DT-990 Pro’s/250 ohm with a Focusrite Saffire Pro interface and the headphone amplifier is strong enough for me. I mix at very low levels though and only bump it up to feel the kick and bass.

If you just bought them, I’d try and return them for the 80 ohm. The alternative is buying a separate headphone amplifier, or interface that can handle 250 ohm cans.

I’ve never tried the DT-770’s , but I’ve been using my DT-990 Pro’s for many years and love them for mixing. The frequency response is fairly flat and they’re super comfy over extended mix sessions. I just replaced the foam pads and they feel as good as new. If you don’t need the isolation with closed-back cans, I suggest using semi-open/open-back cans for production and mixing. The audio just seems to breath better in my experience and not be as fatiguing. I have a pair of AT-M50’s for recording vocals or guitar, when I need isolation and worried about bleed.

I use the DT-770 250Ω. I don’t find it particularly lacking in output, but I’ve occasionally wanted more during tracking.

The most direct solution is to get a cheapo headphone amp. Even the cheap ones generally have more power than an interface. These can take a direct headphone out signal. Just turn it down at the source so the amp doesn’t distort, and then turn it up at the amp.

There are expensive dedicated headphone amps that work off line level. A really good one can be stunning in terms of clarity, and nothing worth it’s salt will be low powered. All will easily drive your headphones past ear damage level without any distortion at all. Performance like that isn’t cheap, but, YMMV, and it may be worth it to you.

Thanx a lot, all.
Can you suggest a good quality headphone amp?
I looked and there are som around 90usd, is that the pricerange you suggest?
Its strange, some people they think highly of the 770s and som consider them flat and boring. Maybe they use to weak amp?
I have a pair of Adam 7 as monitors and I want similar, or preferably, better, sound in my headphones. I think the power in my tascam144 is very limited.

The tascam144 is probably very low in power, its 15years old also so maybe I should get a new interface.
The 250 ohms are harder to drive offcourse but still, its poor.
Yes, the pads on 770 are very nice, you dont have the sticky-feeling and like you suggest, if I change them I get almost new headphones.