Apparently, after trying the new release on my test machine, it is necessary (from what I can tell from other closed threads) to have my account reset to deal with “max simultaneous auths” issue on my primary machine. As I don’t see a method for informing support that this needs to happen (what am i missing here) please do so and let me know.

I’m thinking I made a mistake by getting sucked back into this maelstrom. Please prove me wrong on that account.

Just send an email to support@bfddrums.com with your account name, or PM @BFD_Drew with the same, and they should be able to get you squared away.

I got this today, for the second time in about two months. I did a new install of an older Mac OS and after I had installed all my other music software, it worked perfectly fine right after SN or online authorization.

On the other hand, BFD3 totally locked me out. Luckily I have SSD5 and other drum software to work with. But still…

BFD3 is like going to vegas and putting all your money on “red” and hoping it doesn’t land on “black”. Not good. I’ve landed on black too many times for something that I’ve come to use a lot and rely on.

I recently did a successful upgrade to Mojave and new motherboard. But before I did, I made a list of the manufacturers that I know tie authorizations to machine ID’s. Naturally I deauthorized all my BFD stuff first and had no issues authorizing on the new set up. IK Multimedia is another company who works this way, though they do give you like 10 authorizations before you have to pay up.

Yes, the question is “How many authorizations do I get?” and in addition, “How long will those authorizations last?” This is my 3rd install on this computer, all in different Mac OSes. But it’s the same hardware except I changed out an SSD.

Still, I’ve been losing authorizations since I had them on just the one OS, so this does not come as a shock to me. However…

I have never experienced this kind of thing except with XLN and their freebie Addictive Keys plugin giveaways when you buy a Focusrite interface, etc. They seem to take the auth. away on purpose to keep you interacting with the company all the time. As such, I don’t really use any of their stuff because I know what’s coming, and it’s not good for my workflow.

I actually went to my BFD account yesterday to see if I could de-authorize a computer from the site as I can with some of my software. Didn’t find anything like that there. And I just clicked on the link on the BFD3 app that took me to troubleshooting where my problem is not even identified or spoken about.

I did find this gem though: 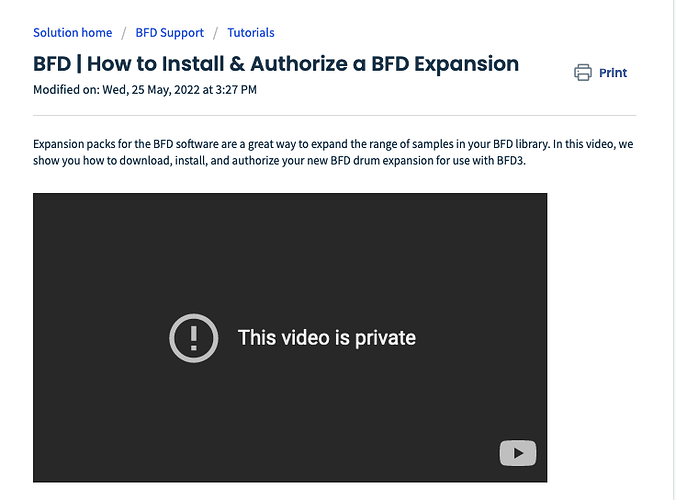 Where does one deauthorize BFD3? On a working install that you’ve finally got working for a few weeks — and now you’re going to mess with that? Where does it say: "You have (x) authorizations left? No. This system is still broken. And if I hook my PC up to the internet now, I’ll bet that my BFD3 auth. on that computer will also be broken because of this error code issue. But I’m actually working on something important, so I’m not going to risk proving it.

I feel sorry for Drew because I think the company is at fault here. They got back to me last time about two weeks after my issue was already fixed by Drew via this forum. Pfff.

Also, I only have BFD3 installed on 2 computers: Mac & PC. In other software, these machines are identified by name and I never lose authorizations, be it ilok or otherwise.

Yeah, I’ve suggested before that being able to de-authorize from your inMusic account would be helpful, especially in the event that your computer dies, which in my case with my Mac Pro, seems to happen a lot. I’ve gone through like 3 logicboards in the past few years and losing authorizations in the process. It’s a gamble when buying used stuff.

I forgot about de-authorizing my XLN stuff before my upgrade, but I think it was fairly easy to delete auths via online. I use that Mark One all the time. Nice freebie. If you’re greedy, you can actually get all of the Addictive Keys products by creating a separate Focusrite account with different emails to redeem each AD Keys.

Yeah. XLN lets you delete auths online. What I was more referring to was that there seemed to also be a timing issue there, too. If you didn’t go online or do something with the keys for a while, they’d deauth. them. Maybe it was a coincidence. But I blame the aliens. This is definitely higher level mischief.

Ah, gotcha… I’ll have to pay attention to that. I haven’t used it recently, but I did have to re-authorize my plugins when I moved to a new system. Could definitely be aliens.

Just to reiterate, my issue is not with having to reauthorize. It has to do with being shut out of the authorization process. I literally cannot do anything right now with BFD3 until I get a 3rd party intervention and support, whereas with most every other auth scheme I’m using, I can eliminate one auth from the computer and move on. In short, I can do my own service call.

Moreover, as a creative person, I don’t want to have to think about this stuff when I’m working on music. It should require minimal left hemisphere interaction. It should not require a full body cavity search to get back up and running.

I know, I just meant I’ll have to keep an eye out for weird behavior with XLN. Yeah, that is a mood crush when you’re excited to lay down some tracks and your computer and or software has other ideas.

I just lost my authorizations on my Mac - can’t download the list…or something.

Anyone else having issues with the auth scheme today?

The drums were working yesterday and the day before. And, I was online. So the 90 days thing seems to be a pointless exercise, at least on this machine.