Drums showing up that are unlicensed

About three or four times now, I’ve clicked on drums to audition when filling out a kit, and have gotten a message saying the drum does not have a license and will be removed. It’s not like I go around installing cracked versions of the expansions, so I’m wondering where these drums came from. I have installed BFD2 and BFD3.3 on this computer before the transition to 3.4. Are there some kit pieces that were part of BFD2 and BFD3.3 that aren’t getting licensed or aren’t covered by the London Sessions license? The kit piece that disappeared today looks like it was from the XFL expansion based on the prefix, and I don’t have XFL: 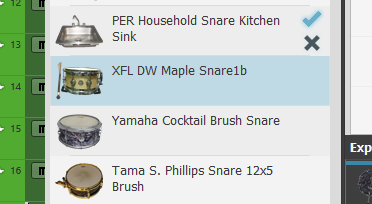 Not a huge problem but if there is stuff I have a license for that’s being kicked out because of a bug or something, I’d like to figure it out and find a fix, if possible.

Hmmm, that’s an odd one. Where are these located on disk? Did you ever own a copy of BFD2 Greatest Hits ???

I actually didn’t get a chance to look, nor if I’m honest did I think of that. I clicked reflexively on the OK of the message that popped-up notifying of the lack of a license and just had enough time to grab the screen cap. I store all of my libraries on my sample drive, so that is the most likely location of where it was stored. If it’s very old, it could be on my C: drive if it was installed around the time of getting BFD2. I usually clone my OS drive when I replace them unless there are issues that I’m looking to solve. Given how long it took to remove the drum, I would say it was on my samples drive which is a hard disk, because my OS drive is a NVMe drive and I would think it would have disappeared much faster than it did.