I bought BFD3 in the beginning of this week and still cannot launch it… it crashes when starting it.
I’m working on an Apple M2.
Never in my life had this much trouble with installing and using a VST…

BFD3 is not natively supported on M2 macs. Have you tried launching your software with Rosetta?

It really falls on the end-user to check compatibility with their hardware before purchasing any software.

I’m a musician, not an IT or pc specialist. I barely knew my mac was M2.
They make it easy to purchase, you just have to click mac or windows. They could easily put there next to that button “NOT FOR M1 or M2”.
I guess it is also impossible to be refunded

I will look into that!
Best,

You should be able to get a refund at this stage, although don’t hold your breath with inMusic, I’ve been trying for a year.

Haha, yes I will buy a different one… it is so much hassle just to get it going in the first place…
Do you happen to know a good affordable drum vst? One that has good heavy drum kits…

Well I’m looking at Superior Drummer 3, but that never goes on sale, the price is the price. Guess that’s the price you pay for working/supported software. However some people complain that it’s biased toward heavy music, so that would actually be good in your case.

Aaah yes ok, well I guess I will look into thane then

Thanks for the reply man!
Take care!

Steven Slate Drums was on sale during the holidays for $49 and that’s a pretty decent drum VI for that price. It’s more processed sounding compared to BFD3 and it doesn’t have much in tweak-ability, but it sounds good and can cover rock, metal, indie, pop genres. Downside is it doesn’t really get updated much and there are only a few expansion libraries that you can buy for it.

If you like already processed metal drums, this one by Bogren might interest you. Most of these metal drum VI’s, including SD3 just sound too cookie-cutter for me though. YMMV 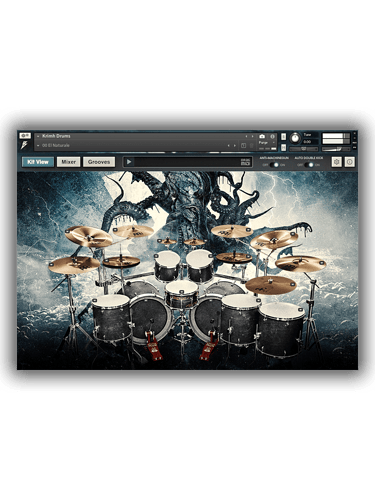 Krimh Drums is a next-level drum instrument created by a top-tier metal producer Jens Bogren in close collaboration with Kerim "Krimh" Lechner — a rising star among today's generation of metal drummers who has lent his outstanding skills to...

I looked at Slate, but the lack of updates and expansions put me off.

SD3 is well supported. If you buy expansions the newer ones apparently have better sound and more detail, so make sure to buy the right ones.

I’ve heard Slate and SD3 on many albums and never thought they sounded cookie-cutter.

Cookie-cutter, in the sense that they’re over-processed to my ears to use as a main kit. I do like to use Slate to augment kick and snare, to give a bit more punch.

awesome! I came across steven slate as well yesterday amoung others and I chose Steven slate in the end

up to now it sounds great! Finally some drums without having to record :'D I’m not the best drummer… drumpad will be the best it can get for me

When the lack of samples and updates start to become a problem I’ll probably change to something more professional… but I also make drumkicks and snares myself in reason and combine them… together it sounds great for now.

It really falls on the end-user to check compatibility with their hardware before purchasing any software.

Well, yes. But perhaps the OP is trying to use it as an AU plugin. The current beta is working with Apple Silicon, but not as an AU plugin…something that the ‘System Requirements’ does not address.

I wonder how many refunds IM have had to give out, for M1/2 Logic users, given there’s not much noise being made here about it

I hope you didn’t pay the full-price, $149 for Slate because it’s probably not worth that kind of money anymore.

True, but the current beta is not an officially released build, so that’s maybe why there’s no mention of the lack of AU in the requirements?

I hope you didn’t pay the full-price, $149 for Slate because it’s probably not worth that kind of money anymore.

If it works out of the gate then it’s worth it compared to a product that doesn’t work but is cheap (cheap for a reason).

I just think it’s silly to pay $149 for it when it was just on sale for $49 and also periodically goes on sale for $99. As I said, it’s a good chunk of money for a VSTi that really doesn’t see much in the way of updates or expansions. It’s also unclear if it’s Apple Silicon compatible yet (which OP stated he had). Doesn’t say so on the product page, only Intel/AMD.

For that money, I’d rather go for something newer that shows promise with development like that one from Bogren, or GGD.

I’m always up for a bargain, but if this guy’s up and running now then what price do you put on frustration? I’ve spent a couple of grand on this garbage, so $149 to have something that just goes would be fine with me. Personally I wouldn’t go Slate either though for the reasons you state, but at least he’s making music now.