BFD3 has been disabled because

I simply disconnected my Mac from power and changed RAM, nothing else. Doesn’t matter which one caused this, either is unacceptable. The LM should not be logging you out and de-authorizing your products, just from disconnecting from power, or swapping RAM. Wtf? None of my other software with very strict authorization schemes does this. This happened similarly in the past couple months.

The LM has been working well otherwise, don’t blow it with behavior like this. 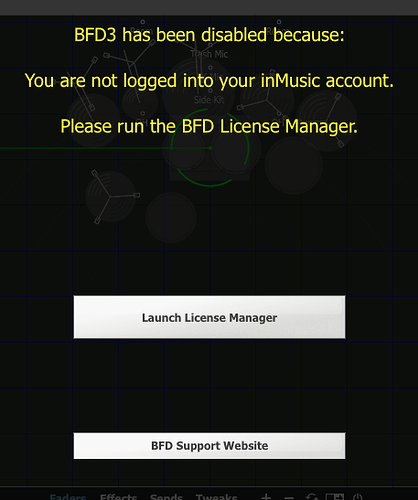 thx for the heads up. i’ll make sure I don’t attempt any upgrades in the field.

@SoundMILL I wouldn’t let that deter you from doing upgrades like memory. Signing back in and re-authorizing was fine, but it’s the principle that this shouldn’t be happening for unplugging the computer and changing memory. Now, switching to a new machine, or motherboard, I can understand why that would trigger this behavior.

, agreed, just that internet access is not always reliable, if even available for location sessions. hacking hardware is not typical, swapping out SSDs in a laptop is… power on/off sounds like a showstopper.

That’s my only major beef with BFD3 - the auth. system. Just let me have the software I paid for and don’t make me go out of my way just to prove that I own it. I already did that the day I installed it; now start behaving like drum software and not an unruly spy app.

Other than that, no complaints.

The damage is done really. Had they (inMusic)) realized what a mistake it was going to be, they could’ve saved face early on and maybe some of that negativity wouldn’t continue to hurt the product.

The app itself still has a lot of bugs and quirks also. I’ve thought about posting more reports, but I feel like a lot of these are longstanding bugs that have never been sorted out and probably never will, with their attention on BFD4. I think their plan and hope, is that BFD4 will save the day somehow as a brand new, fresh iteration and if it debuts well, it will just separate itself from it’s predecessor as being unfriendly to the user.

I continue to deal with all the bullshit because at the end of the day, it’s still the best sounding drum VI that I myself have ever used. As long as it’s not halting my creative process, then I just work around the inconveniences as best I can.

I know people hate pace and iLok, but I like it. I think every software company should move to it, frankly.

Think how much better BFD would be, and how much more popular, if we didn’t keep running into this crap.

@Wheever I’d be totally fine with iLok, but Drew already said that is never going to happen, unfortunately. Shame because I’ve been using it for 15 years with no real issues. They just need to go back to the old Fxpansion system with an authorization file on the computer.

As a previous iLok hater, I’ve now even recently bought a usb dongle, I’ve gone full iLok, even though I was advised, “Never go full iLok!”

So yeah, I’d rather they did this. They won’t, that’s not how inMusic operate and Drew has already said they won’t. I hope no-one’s hanging around expecting them to change any of their spots.

I’ve already given up the ghost of BFD and re-used my dedicated BFD SSD for Kontakt libraries, it’s really not worth the aggro trying to deal with inMusic.

I’ll hang around though to make sure any potential new customers, who may be unaware of how truly terrible inMusic are to deal with, are properly informed. I imagine most will be put off.