What more do I need to say?

Win 11 currently working on a Raspberry Pi 4, Reaper running fine. BFD running fine. No ASIO tho, so I’m not convinced about latency just yet.

Cant get either the Tascam Model 12 ASIO or ASIO4ALL to work just yet.

No ASIO means no standalone BFD. Its working fine as a vst plugin with in Reaper tho using WASAPI mode. Gonna try a different USB audio interface, something a bit more standard, like the Zoom H5. Or maybe even the Focusrite.

Might try Win 10 instead to see if ASIO works.

Hahaha, you actually did it, you’d burst if you didn’t try!

Have you tried ASIO4ALL or not worth considering?

Have you tried ASIO4ALL or not worth considering?

Tried and not responsive. Choosing ASIO4ALL causes a crash of Reaper. Choosing Tascam ASIO doesnt crash but no in/out options come up.

Just having a coffee then I’m gonna try a more well supported/older device, then plug MIDI in to see how the latency feels using WASAPI (I dont think Reaper is reporting correct values, and didnt try any MIDI input last night). And finally, I’ll try Win 10 on the RPi to see if that allows ASIO to work.

WASAPI audio in/out works fine tho, there was no crackling or audio errors, so at worst, it works as a proof of concept and can be manually/human synced if BFD is the leader and has a count in for pressing play on the rest of my set up (one ‘play’ button press on the hardware I have sets about 10 devices off, so it can all be manually synced to BFD on the RPi, even if it cant be MIDI synced due to latency).

Basically tho, it works. The SSD use isnt an issue, but graphics might be a slight issue, as the Pi is only onboard graphics. A graphicaly slimmed down BFD would work fine, audio streaming isnt an issue it seems.

BFD should get on this

A dedicated Arm64 version should be made for the RPi, as its got enough power, just needs a more complete OS (I couldnt get WINE working on the Pi just yet, but it will eventually).

Just need a small but useable screen for it now. Maybe a touch screen, something to just be able to change presets/kits with, and its a tiny, portable BFD, smaller than a laptop.

Perfect for my offline, remote, battery powered/solar powered jams. Smallest and best sounding drum machine in the world, anyone?

Reaper is reporting about 13ms latency (in the top right of the screen), which seems to be about the lowest I can go (200spls) without audio tearing noises from the latency.

Reaper is playing BFD from BFDs own built in grooves, quite a rock thing, and its cycling thru about 12 grooves loaded into BFD.

Arturia BSP is also sending MIDI data over USB to tell BFD what extras to play on top that I’ve sequenced in the BSP own sequencer. And I’m hitting the pads live and not really feeling any noticeable latency, my hits are sounding quite in time to me.

Audio is coming out via USB3 and into my Tascam Model 12 mixer which has no ASIO drivers that are working. Tascam ASIO driver doesnt even see there is a device connected. 48khz/24bit.

This is all using WASAPI as Reaper’s driver as there is no ASIO on Win 11 Arm.

I’d call this a success tbh.

Next I’ll try Win 10 Arm64 Home edition as it might be a lighter version of Windows, it might help slightly.

EDIT: Slight, very slight, and very occasional audio tearing while I’m going hell bent for leather hammering these drum pads, and playing grooves and playing the heaviest fastest hihat line I can sequence on the BSP. This is def a success in my book.

EDIT2: I should add that the Tascam Model 12 has the worst latency out of all my devices. Its still usually low enough, but its around twice what my other devices report. So another device might get still lower latency. And I’m not even using ASIO.

Windows 11 Home Edition, ARM64, is a lot snappier on the RPi4. Far fewer background services, but still a lot that can be disabled. Wifi, bluetooth, printing, anything and everything I can turn off/disable, I have.

I’ve run out of concurrent installs according to the LM tho, and because I’ve installed a bunch of different editions of Win11, and maybe Win10 twice on this machine, I think there is a four machine limit?

If I can get BFD running again, I’ll carry on testing. This version of Windows feeling snappier, I was hoping it might make a bit of a difference to latency…

EDIT: Still no ASIO working, but it just crashes Reaper now instead of giving me hope! Using WASAPI, the Zoom H5 has Reaper reporting a slightly lower 9.5ms out, over the Tascam Model 12’s 13ms. I cant feel any difference tho, and the latency/samples cannot be turned down any lower. I’ve got audio inputs in Reaper turned off, just in case it helps, as I’m only using audio out via USB and MIDI in via a different USB device. Feels good to play, I cant feel any latency.

This looks kinda perfect for having the Pi attached to a screen, while also in its own case (with the right fittings), and a fan option (a big 140mm going at a really low speed, silent) on the stand too.

7inch touch screen, full screen BFD, either standalone (not currently working), or VSTi in Reaper (working in Win 11 on the Pi4, 8gb, 4 core CPU overclocked to 2.3ghz!). Velcro an SSD to it. 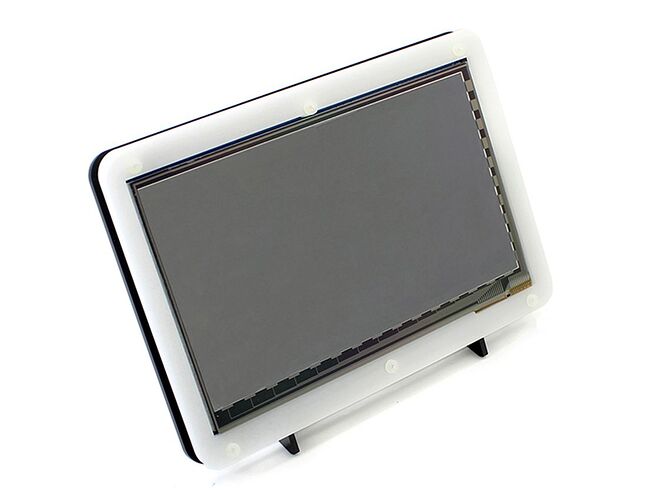 Waveshare has released this neat little 7" touchscreen display for the Raspberry Pi! It's easy to set up, and comes complete with a black and white acrylic stand! This kit features an 800x480 resolution screen. This device uses the...

Gone back to Win 11 Home ARM64 and it works marvellously smoothly. Its a pain having to make an M$ account, and there are so many services that can be stopped and arguably need to be stopped to get the most out of using it on a Raspberry Pi 4, but the 2.3ghz quad core CPU and 8gb RAM is performing admirably.

If you have a spare monitor, I def recommend picking up an RPi4/8gb and a dedicated SSD or two, and giving this a whirl. RPi’s are really low cost, and most of them seem to overclock really well. I might get another.

TINY BFD! In every room! 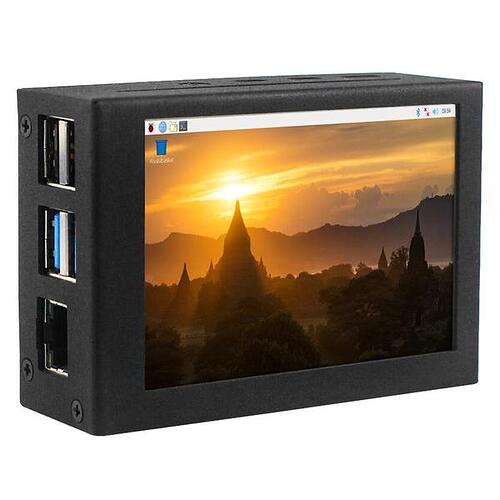 Mixer effects are heavy and mess things up with Tiny BFD.

The preset ‘Textured Drum Rooms’ is one of the few I’ve found that wont play nice with the Pi. It just wont play properly at all. However, if I reset the mixer to empty tho, it plays the kit and stock grooves just fine. I havent tried extending the latency yet, to see if that gives me more effects power but I’ve got external effects for that tho, which was part of the point of doing this. To have a tiny BFD for using with other tiny gear. I just want this little box to output audio over USB, and if possible, send/receive/record MIDI for clocking with other hardware. If I only get audio out and nothing more, thats fine too.

About 6ms latency being reported atm.

Just need a tiny, quality, audio interface for it now, class compliant USB, and I can put it all together as a tiny mobile setup. Just needs a stereo out, and if possible, a midi in/out too. And another TINY BFD option. I’m very impressed how these things work, 4k. Amazing stuff. It wouldnt run many effects or maybe even any at all, but it would likely run BFD when just disc streaming and thats impressive as all hell to me… 8 MIDI tracks, recording and playback. Could be perfect for a TINY BFD mobile set up, or a tiny set up for gigging with? This plus the RK006 means being able to sync anything and everything, plus record and playback for all devices. Quite amazing.

This thread should probably just be retitled TINY BFD!

Looks like a great option for a TINY BFD! Could do without the speakers tho.

This is what I mean. Nothing like this exists on the market AFAIK. BFD running on a tiny format, from an SSD. 7" screen. Super portable TINY BFD.

It wont cope with effects (i havent explored TINY BFD much since I got it working tbh) I dont think, but purely streaming audio data from a drive, being played via MIDI, it can do that it seems.

And consider the PC power BFD1 was running on, 20 years ago or so… We really should be able to run BFD on a tiny PC with no issues. Suddenly, a whole portable world of real drum sounds from a tiny drum machine opens up.

Headless would make this a dream portable percussion setup.

Im not very up to speed on Linux and the RPi in general (this is my first RPi). I tried various Linux options for this but couldnt figure it all out. I’ll try again one day.

Reading back thru the thread, it would look like im on Win 11 still, but I’m pretty certain I switched to Win 10 ARM Home edition, and an old Fxpansion version of BFD. I guess I should boot it up to see if its still working

If you try any of this, I would love it if you posted your findings

BFD should get on this. A TINY BFD for the future!

EDIT: And this RPi case means overclocking can be nicely extreme