Is this forum for bfd3 only or can user of bfd2 ask questions?

BFD2 isn’t technically supported any more so you probably won’t get help from any of the BFD team but a lot of us here are former BFD2 and BFD1 users so might be able to help.

I have BFD2 running here on my windows 10 desktop.

Thanks Steve, I was on Win10 but moved over to a Mac, The problem I’m having is I can’t Authorise it, so if anyone can chip in with any suggestions that would be great, but I’m inclined to think I might have to upgrade to 3 which I’m not prepared to do at the moment.

What version of the licence manager are you running?
Was it the same one as you had for windows but a mac version?

You could try contacting support@bfddrums.com to see if they can help or log into your fxpansion account and see if you can download the right version on the LM.

Maybe PM @BFD_Drew if you can.

I installed straight from the dvd’s x5, I wasn’t aware of a licence manager, sorry…

The LM from the retail DVD’s is super outdated. Did you log into your FXpansion account and download the last stable build of BFD2? That will give you the most recent version of the LM I believe?

There is a limited amount of authorizations that you can have. Perhaps you reached the cap? That happened to me years ago from not de-authorizing BFD2 when I was re-installing my macOS for various reasons. I emailed FXpansion and they reset my authorizations.

A few months back, you could upgrade to BFD3 from previous versions for only $49. Shame you missed out.

Thanks Fender Bender, I’m having problems with their website, can’t get anything to download, just goes to a white screen, the only LM I can see is for BFD3, hopefully they might reintroduce the BFD3 upgrade offer again.

I’m in luck, just managed to download LM and has now been authorised, thanks Fender Bender / Steve63 for your help, really appreciated

Just a heads up… Plugin Boutique has BFD3 Upgrade from older versions for $99. Obviously not cheap, but still $50 cheaper than is currently advertised. 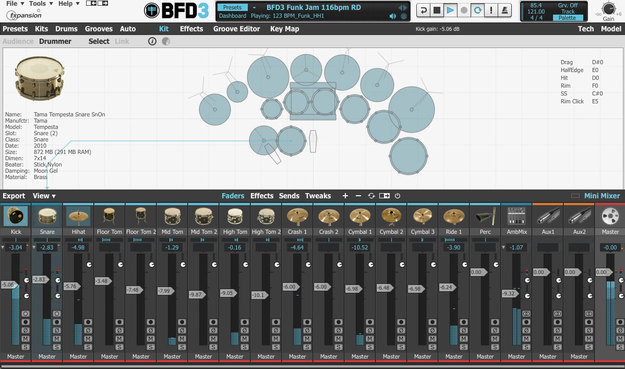 Ha, yeah I looked at plugin boutique in my panicked state a couple of days ago, in terms of drum sounds is bfd3 that different from 2?

I would say the samples themselves are better. More mic channels as well. I’d suggest listening to whatever audio examples you can find for BFD3, to see if there are kits that you think you’d use. Sadly, there really isn’t much of the way of reviews on You Tube, but there are a few.

Aside from the samples, the plugin itself is much better overall imo. There are more FX in the mixer if that’s your thing. Bouncing/routing tracks to DAW is much improved… I could never get BFD2 to export audio properly. There’s just more tweak-ability overall for mic bleed and anti-machine gun hits. The groove engine/editor is also better.

The GUI for BFD3 was one of the reasons I never upgraded when it first released. I was so used to the way BFD2 looked and was never a fan of the flat look the OS’s were moving to. Years later (this year in fact), I finally upgraded with the $49 deal and I honestly got used to the BFD3 GUI pretty fast. I was just excited to be using BFD again and I quickly realized that the pros definitely outweighed the cons.

One thing they did drop with BFD3 was the mixer presets and being able to save them. Mixer settings are stored with with the Presets that have the kit, grooves and keymap. Not a huge deal breaker, but there have been a lot of suggestions to bring that ability back for BFD4 from users here, so I would expect to see it with V4.

Thanks for all this info, much appreciated, umm, not being able to save mixer settings wouldn’t be a huge loss as I only had 3 or 4 depending on what the project was etc, I’ll be looking at what Plugin Boutique has to offer on Black Friday