NOTHING, no kits, no presets showing now 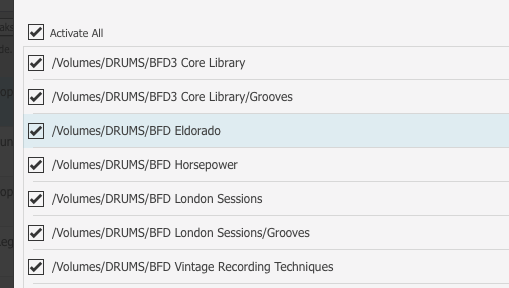 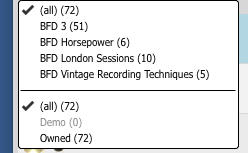 All Expansions are AUTHORIZED as well

I’m showing the library name for Eldorado to be BFD1, which you aren’t seeing.

I don’t have any presets or kits for Eldorado. I don’t think there were any. I do have grooves. You don’t have a separate path for grooves, which makes me think that you aren’t scanning that directory at all.

If you go on the command line and cd to /Volumes/Drums/BFD Eldorado, do you see Audio and Grooves?

This might be a mac/windows thing but on your screen shot there is no drive listed.
On my contents page there is the drive letter shown on the left. 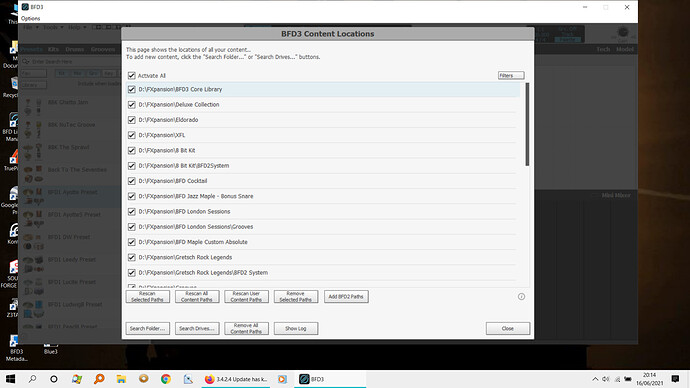 This might be a mac/windows thing but on your screen shot there is no drive listed.
On my contents page there is the drive letter shown on the left.

Go to the directory above this. Is there one called System or Grooves? Presets, Kits, and Grooves wouldn’t be in the Audio directory. My Eldorado is now the currently distributed one, and I don’t see any presets or kits associated with it at all.

I’m on Mac. It’s not totally unusually for a handle not to work if things get reinstalled or whatever.

Did 1,2,3 here, nada. Just no Presets or Kits showing up. I had them with BFD1 under FXpansion.

OK. Are the drums showing up? That’s all that exists under Audio. I don’t have any Presets or Kits, either. Where were the old files located?

I may have moved my Grooves under Eldorado from an old installation.

Yeah the drums are there. Anything FXpansion I trashed here so as to avoid any confusion. It does nothing when I scan add BFD2 paths as those are gone as well.

I know only the drum samples are located int he AUDIO folder.

If you look at any of the other Expansion packs you have an Audio and maybe a Groove folder YET, the Kits and presets show up for them including BFD3 and all the other ones I have here. Weird

OK, so it’s working for everything that you see. You just need to find your old presets or kits, wherever they were. Correct?

Installers often put kits, presets, and grooves under the main location, which is under BFD2 or BFD3. The BFD2 path is especially annoying. That’s what that “Add BFD2 Paths” buton is for. Some expansions do the right thing, though, and put them under the expansion directory. I usually end up doing this manually. When I get a minute I’ll see what Eldorado does. I don’t think it has any in the current distribution.

If you can find them, you can move them to your User path, or any path you want. I’m pretty sure I never had any.

OK so I FOUND the kits in the INSTALLER under:

/USERS/Shane/Downloads/BFD Drums/BFD Eldorado/Installer/Payload/BFD2System. I then scanned the KITS then the PRESETS from there and voila. 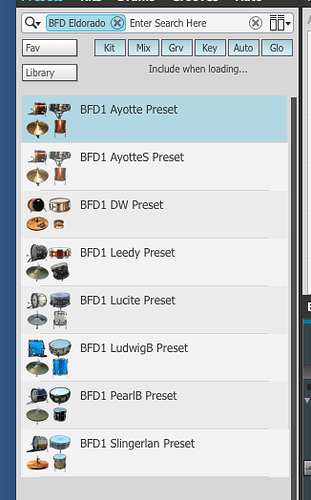 Interesting. So they exist in the installer, but the installer is sitting on them instead of installing them? That’s not good.

And actually, I just found all of those kits, except mine are all in my user directory, and I’ve tampered with all of them. Gotta say, I still love LudwigB.

When I scan the Add BFD2 path it says No path found.
So manually do them if needed

I bet you have those kits and presets somewhere else in your path.

I found that when I added those the way you did, that it coverd up the ones in my user directory. There’s identifying information in the files, so my suspicion is that BFD doesn’t just view them as a path to a file in a filesystem.

The only thing in my path is piss poor programming here

Yes you are correct, BFD has stuff everywhere which confuses the dBase when scanning things.

I loaded up every El Dorado Kit and Preset one at a time and saved them with a slight diff name after I got passed the many crashes.

They are ALL in the USER folder now for kits and presets and DO NOT crash when changing kits or presets. They are of course saved as BFD3 kits and presets now and NOT BFD2 which where crashing the app.

Weird. Yeah, there seems to be some bfd2 incompatibility in there somewhere. Not good given how many of the expansion packs are still distributed with bfd2 files.

I know it doesn’t help your issues much but I have Elderado and all presets load fine with no duplicates.

Is there a chance that the migration process created the duplicates?