I bought this software, I didn't RENT it!

Is it giving you any specific error messages? One of us may have had the same issue and might have some form of solution.

BFD’s migration to its new owner and servers have not been going that smoothly for some of us, but the bugs are getting worked on and being resolved.

You can likely get back up and running quite easily, with a bit more info, and some BFD staff’s eyes on your posts.

And calling @BFD_Drew regarding your BFD2 non activations…

These are the messages I got so far (see post below, too). One tells me to reinstall. Yeah. Why would I want to do that if I have changed nothing on my computer and everything else works?

NOTE: My MAIN music production machine is a PC and I just tested it now as well. Tried to start BFD3. No go. License manager wasn’t starting either.

Two machines. Same issue. So it’s not a corrupt bit of code or something that requires a reinstall.

However, I sent an email to support months ago and have heard nothing. So there’s that…)

Did you contact them via the on line form or their email, support@bfddrums.com?
The latter might get you a quicker response.

With regards to the licence manager, did you try logging out in the LM and then logging into your inmusic profile through your web browser?
I had a similar issue months back and this method worked for me and has since worked fr a quite a few others.

There is a new build going to Q&A shortly (according to @BFD_Drew) so hopefully if the above doesn’t work, they’ll be a new build along soon that will.

Why would I want to do that if I have changed nothing on my computer and everything else works?

I guess because sometimes it works, much like turning your computer on and off does actually work sometimes, although mostly not.

Okay. I logged out and logged back in. Suddenly my stuff is working again. Guess that’s what’s wrong with the PC version of BFD3 as well. Good to know. I’ll fix that later. It also means that if I was somewhere on the road away from internet access, I’d be stuck.

Also, yes I did use the online form and after this long…I think “faster” is no longer a consideration. It was just ignored or skipped over. I also don’t recall getting a “message sent” landing page after, so maybe the form code didn’t even work (I’m a web developer as well, so I’m acutely aware of some of these web-based backend issues and idiosyncracies).

I also have no idea why BFD2 doesn’t work as it should. I believe I followed all the instructions. There have been times where it looked like it would work, but then it never did. Again, I don’t want to be fighting an uphill battle for simple things. However, I can use it as separate BFD2 software. But I want it integrated with BFD3 and I thought I read that the license could become invalid.

hy would I want to do that if I have changed nothing on my computer and everything else works?

Thats seems to be fairly generic message that BFD is showing people. It really should be changed, as its quite vague, and making someone think they have to reinstall 10’s/100’s of GB of data just to get things working again is only going to get people really worked up.

Quite a few of us have been in the same boat.

Def make a thread about your BFD2 issues, or use the email @Steve63 provided, to get eyes on your issue. Some people have had to get new serials n stuff generated to get things running again.

It also means that if I was somewhere on the road away from internet access, I’d be stuck.

Yes. This is a huge issue in my mind too. So many producers work on the road, and work should not be held up just because we dont have internet access to get the software we had running a few days ago, running again. Its something I’ve been banging the drum (pun intended) about since it cropped up. Its not a good business decision, its not customer friendly, and I’ll keep on banging on about it until its resolved and I can be in the middle of Scotland, cut off from everything, and still be able to program drums.

These things are being dealt with, just taking time for them to track down the issues I guess.

EDIT: Thats awesome @Steve63 got you up and running again

There was a while where the on line support form wasn’t active but I thought Drew had said it was working now but don’t quote me on that, I’d still prefer direct email either way.

The BFD2 library is now The London Sessions and the BFD1 library is called Eldorado.

If you’re a registered owner of either you need to email @BFD_Drew.
He can give you a serial number so you can download a free copy of The London Sessions via the licence manager.

Thanks for the assist, guys. And also for chiming in about the issues that need to be addressed.
I’ll check my BFD2 serial (paid about $500 when it first came out. :o ) and then I’ll email Drew about that London Sessions library.

Thanks for the assist, guys. And also for chiming in about the issues that need to be addressed.

@Steve63 is one that can actually remember the details of what people need to do with the solutions that have come up so far, I cant keep track

Nice one to Steve and the rest of the folks who can remember stuff!

I think its just that we all love BFD and want it live long and prosper so are only too happy to try and help!

Happy to help you if you provide some details (MacOs, LM version, BFD version)
If you scroll through some threads here you should be able to drop a message to @BFD_Drew

Since I have quite a slow internet connection too I cheated on the downloads: Waited for the downloader to set up the structure and then copied my old content (BFD core and some extentions) into it, restarted the download for checking the already loaded content. The key here is to have everything in the new structure, not only doc/BFD Drums but also on the startup disk library.

Just a side note: I earned my “Basic” and PMed Drew. So hopefully: “and they all lived happily ever after” with this issue, too.

Stephan_S: I think I’m okay here for now. Thanks.

Hi Steve! I’m having the same issue as everybody else. I am still getting error messages and cannot log back in at all from there once I log out in the BFD License Manager. I’ve also reached out to support 2x and Drew. Any idea what else I can try? 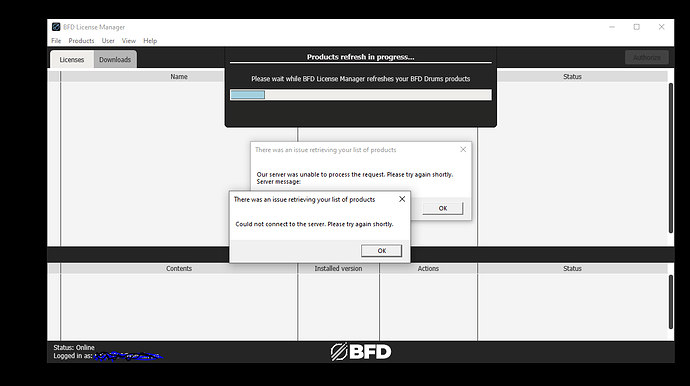 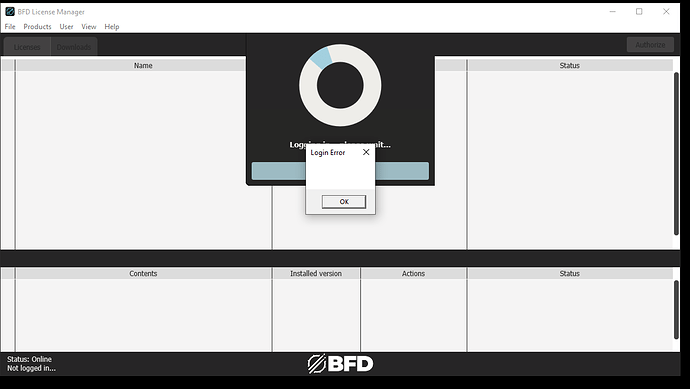 This is what worked for me and has done for others so hopefully will for you.

If it doesn’t I’m afraid there’s something else going on.

Thanks Steve. Tried logging out, closing the LM and then when I open it back up I’m already logged in and get the same errors again. Which reminds me of another weird issue. Whenever I uninstall the LM and re-install it, my user name and password are already there. I haven’t had to put those back in. Could it be a registry issue?

Did you try logging out in the LM (in User menu), close and then re-open LM and then using the User menu to log back in, it opens a browser for you to log in. Sorry if you have alrady tried this.

Hey operandx. I opened LM, logged out in the user menu (which bumps you over to the webbrowser), got the logged out message. Then when I open up LM it has me already logged back in and I start getting the error messages again.

I feel like that’s possibly where the issue lies. When I uninstall and reinstall the LM it has me already logged in.

I suppose you have removed and reinstalled LM and made sure it’s latest version? Sorry I can’t help, hope you get it sorted soon.

You could try uninstalling the LM again but this time (assuming you’re on windows) go to C:\Program Files\BFD Drums and delete the licence manager folder.

It doesn’t show up in the program manager anyway so that’s the only way you can get rid of it.